This is a video that was on the "Today Show" about this issue. Pay close attention to how that white man and the correspondant ask ALL of the questions. The person who asks all of the questions controls the conversation. I asked the "dumb white guy", some of my own questions as though I was on the show myself. please watch it BEFORE you read my questions.

I think that recognizing that I am a VOR and that the system of Racism / White Supremacy retards my thinking ("you're a dumb white guy and I am a retarded black male") would have added balance to the conversation.

My first question would be "Why are you saying that you are a dumb white guy?" If I were a black female I would ask "Why did they choose ME to come on and speak about this instead of a black male?" I would also ask him- "What do you mean by taking it up to me being an African-American woman?" What exactly does that mean? Because to me the video appears to send the message that the black female is jealous of the white woman and calling it Racism. It also appears that when he states that she is an African-American woman, he is saying THAT is her only reason for being there.

He then says that he is put into a tough position. I would ask "Why does this conversation put YOU in a tough position?" Then he mentions his background "coming from the world of images and the world of photographers".- I'd say "wait a minute...wait a miNUTE, I am a retarded black person, can you slow down for me, I have some questions about this world of images you are speaking of"


It appears to me that I am in a world of images, also. So that I can understand you better, What do YOU mean by a world of images? He then talks about "Raw white guys" and "Raw black guys" and their emotional personalities coming out for the "energy" of the photo. I know some things about photograpghy, but, not as much as a "dumb white guy", because again I am retarded, but, generally doesn't the photographer instruct their subjects in HOW they want them to pose? Does anyone instruct them as to WHAT kind of clothing they should wear? How about facial expressions? Body language? Are they told when to show emotions and not to show emotions? After, they have taken all of these different photos, is there anyone who determines which photos are best for what they want to communicate on the cover? You agreed that this cover is Art, do you agree that the purpose of art is to communicate a message? What type of message do you think this cover is telling us?

Why does it say "A PERFECT FIT" in bold letters on the left side of the cover? Have the words "A PERFECT FIT" ever been applied to suggest that two people are "right" for each other?

At the bottom of the cover it says "Gisele & Lebran", isn't that one of the ways that "lovers" are refered too? Why does it say "YOU ARE (NOT) WHAT YOU EAT" on the right side of the page, at the level of their genitals?


Did you know that psychiatrist, Dr.Francis Cress-Welsing mentions in her book called "The Isis Papers" that "It is of symbolic importance that the large brown basketball is thrown into a circular opening (the basket is usually a white net) that can be viewed as a symbol of the white female vaginal orifice"?

Could the image of Lebron "throwing the basketball down" send the message to black males to give up on the game of putting a brown ball into a symbolic white vagina in exchange for putting his brown balls into a REAL "white" vagina? 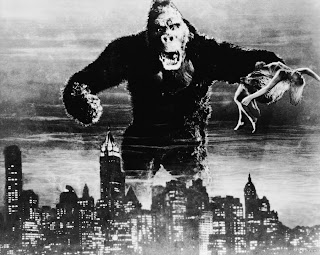 See the similarities between the Kong picture and the picture below? Look at the ape's face and then look at Lebran's face. See how they are both holding what is presumably a "white" woman in their arms? Lebran's shoulders are slumped forward, giving him the silhouette of a "Gorilla".  Both Lebran and Kong, have the mouths open, as though they are "roaring" aggressively. The Racists (White Supremacists) have been comparing "Black" people to apes for centuries. Now all of a sudden they don't? why not?That's what I call Racist Propaganda. It propagates Racism (White Supremacy).


Why is the image being presented again? Because it reinforces the thoughts, speech, and / or actions, that are needed to keep the system of Racism (White Supremacy) in place. This Vogue picture is nothing more than a refined image of the old one above. Does how we react to it as Victims cooperate with Racism or does that reaction serve as a resistance to it?