I'm a Day late, but not a dollar short. This is what I wrote yesterday:

M.L.K. Jr was a Counter Racist. He observed what another Counter Racist (Mahandas aka Mahatma Gandhi) did in their attempt to eliminate White Supremacy in another part of the planet. That attempt involved a series of non-violent protests against the mistreatment of "non-white" people in so-called India. 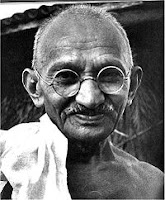 Gandhi's method appeared to work at first. The protests even caused the White Supremacists to lose a lot of battles. The Racists were outnumbered (and still are) in so-called India, Gandhi's method had forced them to bow down to the demands of their Victims. Violence doesn't look good when used against those who practice non-violence. Violence is savage and makes the "status quo", while claiming to be "civilized", appear foolish and hypocritical.

The White Supremacist code says that being "savage" is reserved for "non-white" people. According to their code we are "savages" from the jungles. The White Supremacists at that time had (and still have) millions of "White" people and billions of "Non-white" people believing that. Seeing and / or hearing that those non-violent "non-white" people were getting stomped and shot for standing up against injustice, doesn't go well with the masses, because it makes many of them feel like they are somewhat responsible. And they are in fact somewhat responsible, because they have the power to force the "status quo" to make a change.

Unfortunately, the Racists merely refined their way of practicing Racism. Once they developed their newly refined way, they assassinated Gandhi. For any of you who want to point it out, I already know that it was a "Non-white" person who actually pulled the trigger, and I know that in Gandhi's early years, he advocated the mistreatment of "Blacks" over "Indians".

Gandhi's method got them "independence" which like most "Non-white" people, confused them about what is really going on.
King went to so-called India to see the results of the Gandhi method of resisting White Supremacy and decided to use it in the so-called United States. 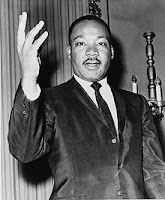 "Since being in India, I am more convinced than ever before that the method of nonviolent resistance is the most potent weapon available to oppressed people in their struggle for justice and human dignity. In a real sense, Mahatma Gandhi embodied in his life certain universal principles that are inherent in the moral structure of the universe, and these principles are as inescapable as the law of gravitation."-M.L.K.Jr


Do you think that King made this decision without knowing full well that he might be killed for doing it?

He knew. But, that was the sacrifice that he made for establishing Justice. What else would one do in a system of injustice? you either sit by and let injustice remain or you do something to stop it.

A "sit by and let injustice remain" attitude is the one that the White Supremacists want us to believe in. Counter Racists like King had that "Whatever my mind can logically conceive or believe, it can achieve, and if I don't get it, I'll die trying" attitude.

Counter Racist Compensatory Logic says that speaking and acting to resist White Supremacy while in a system of White Supremacy can get you killed. Effective Numbers of us must make the sacrifice.

Today and every day should be a day used for thinking, speaking, and / or acting to eliminate White Supremacy (Justice).

Stay Strong In The Struggle To Replace White Supremacy With Justice.

Posted by Khalif "SynQ" Muhammad at 17:25 No comments:

Enforcement Officials Plant Drugs on a Victim of Racism

According to the RAW STORY, Enforcement Officials in "Utica, New York", planted evidence in the vehicle of a Victim Of Racism, while he stood handcuffed. The video was recorded by the dashboard camera of the Enforcement Official's cruiser (clear proof that all "white" people aren't smart).

You can in fact see the officer taking a package from his rear pocket and placing it in the vehicle and then walking in front of the camera with it in his hand, making it obvious to the camera as if to say "see what I found?". This kind of deception has been going on for a very long time. Look up the word TENDERLOIN, in the Webster's dictionary.

Those of us who've observed the system of White Supremacy in action, are not surprised. There are 40 million (12% of the population) "Black" people and 300+ million "White" people in these so-called United States. Yet, 44% of the people in Greater Confinement (prison) are "Black" males?

Don't think that I am misinformed. I can tell you from first hand experience that not all "Black" males in Greater Confinement are "set up". I came from a habitat ("Richmond, CA") where crime was directly and indirectly promoted as THE THING for "Non-white" people to do. But, getting set up, by Enforcement Officials does play a huge role in this process. 12% of the population, but 44% in prison? puh-lease. A lot of Victims of Racism ARE getting set up. It's just that most of the people setting them up, aren't this stupid.

Just like with Rodney King, most of the world didn't believe us when we were saying that corrupt Enforcement Officials were still mistreating "non-white" people with violence in the 80's and 90's, until the Rodney King video was released. The media played it over and over, as though it were a great surprise that the "American Democracy".....land of the free, was all of a sudden losing it's ideals of justice for all people. Wake up and smell the coffee shit!

Coffee smells better than what we have here. What we have here is funky, foul, and disgusting, like shit. Injustice smells that bad. As Malcolm X once said (I'm paraphrasing) This is not a democracy, it is a hypocrisy. We've never had justice. Never! No one on this planet knows what justice is, but the sophisticated White Supremacists want all of us to believe that it does exist, well they don't care to much whether "Non-white" people believe they have justice or not. That depends on the circumstances. They want us (White people included) to believe that "Non-white" people, especially "Black" people are criminals by nature or by culture (behavior). This incident actually occurred in February of last year. I suspect that this story wasn't broadcasted nationally, because it would divert attention away from the White Conservative Politics that have been going on day in and day out. I could be incorrect.

Possible solution: If you aren't on probation or parole, when you get stopped by the Enforcement Officials, DO NOT GIVE THEM PERMISSION TO SEARCH YOUR VEHICLE. It doesn't mean that you are hiding something. It means that you are protecting your privacy and possibly keeping them from planting something in your vehicle. It also means that if they ignore your right to privacy, and do happen to "find evidence", your case could be thrown out, for violating your constitutional rights. Let's face it all Enforcement Officials ain't corrupt, but do you really want to take the chance? I wouldn't.

Stay Strong In The Struggle To Replace White Supremacy With Justice

Posted by Khalif "SynQ" Muhammad at 21:07 No comments: