You need to know, that all over the planet,if you are a "non-white" person, that there are Racists preparing to kill you. Many years ago in the late seventies, I remember seeing news clips of Racist Suspects practicing with firearms in the woods. When asked by the reporter what were they practicing for, they responded "To kill niggers in the coming Race War".

Since then I have had two Racist Suspects pull guns out on me as they called me nigger. Both times they used deception to get me in range. The first time I was 12 years old, riding my bike when I heard this voice say "Hey, turn around!" I turned and saw a door to a house, on my right, cracked open. I couldn't see who was on the other end, but I could hear the person mumbling something. I got closer to listen. The barrel of a rifle eased out through the door while its wielder shouted "I said hold it right there, nigger!" I pissed my pants a little and froze. I didn't know what to do. Then my instincts said "let him shoot you running". I rode off fast as I could. I told my Dad and he called the "police". They picked us up and I took them there. The Enforcement Official immediately knew who it was and said "Oh he's a troubled kid, don't worry about it." and took us back to our house. They did nothing.

The other time was when I was selling the Final Call Newspaper. A person that I presumed was "white" asked me what was I selling. I had no problem telling him because plenty of "white" people had bought the Final Call from me before. I walked up to his car to show it to him, then he pointed a 357 Magnum at me and said "Get the fuck away from my car, nigger!"  I froze. The light turned green and he drove off.

The evidence (thousands of lynchings) shows us that we are at war, but, it can't be stressed enough that there are Racists with guns who are preparing to use them on you, especially in situations of chaos.

Some "black" people were killed in the Katrina aftermath by Racist Suspects who saw opportunities to "defend their neighborhoods". The guy ("RV") in the below video is an admitted Racist(White Supremacist). Pay close attention to what he is saying and doing. Word for word. Then go out and arm yourself, if you haven't already. If you have firearms, practice, practice, practice, and then practice again!

Posted by Khalif "SynQ" Muhammad at 18:57 No comments:

Does the system of Racism (White Supremacy) exist?

I am constantly asked by Racist Suspects and the "non-white" people who worship them to "prove" that the system exists. Most of these Racist Suspects already know that it does, but behave as though it doesn't to confuse "non-white" people about it's existence. If one follows the logic, one will see that it is here. Anyway, here are a collection of videos from YouTube that I present as evidence that it does on fact exist. Below is a "playlist" of videos. They all follow behind each other, after you press play.

Posted by Khalif "SynQ" Muhammad at 15:50 No comments:


I first heard this quote at the age of five. It made me laugh real hard. I'd make a loud chuckle and role around on the floor every time I heard it. I suspect that it was the word "balls" that did it. This morning, I did a little research on this phrase by way of Google. It didn't take much digging into the origin of this quote to learn that it's creation is a mystery, some say Teddy Roosevelt, others say Lyndon Banes Johnson, John Wayne, Richard Nixon or some other guy that worked for Nixon made the term. Here's what I found on the internet. 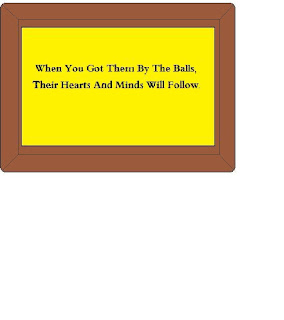 The phrase was one of my father's favorites. He used to say it a lot back in his "revolutionary" days (late 60's and 70's). He loved this quote, so much that he had it made into a plaque and conspicuously placed it on the living room wall beside the front door of our house, so that he could read it everyday just before he stepped outside into the world. I had many chances to ask my Dad what this quote meant to him, but it did not come to my mind until yesterday.

Unfortunately, Dad passed away in March of this year. He would have turned 69 on the 27th of September. There were many things that I still wanted to know about him, but, to be honest, I didn't have the nerve to ask. As a child he raised me in a way that would make me feel uncomfortable about asking certain questions about him, and sometimes he'd get angry about it. Not knowing beforehand which questions he'd approve of, left me to decide early on in my existence NOT to ask many. His behavior in this matter did change within the last 15 years of contact that he and I shared. Though, not asking became a regular habit for me, I learned to ask when he was in a mood to talk about himself. I wish now that I had stepped outside of my comfort zone and asked him, at other times. There is so much more about him that I wanted to know. I'm not saying that he didn't help me answer a lot of questions about other things, because he did, but most of the answers came by way of him directing me toward a book on whatever subject that I sought answers to.

He is with the ancestors, and now I have to attempt to communicate with him through the traditional process, which is much more different and difficult for me to do, as compared to a face to face conversation.  I should say that he didn't like answering questions about himself, until the later years.


To those of you who still have acting parents (even grandparents for that matter) who are breathing at the time of this writing and were around during the "Jim Crow" refinement / maintenance period of the system , I highly recommend that you ask them at least 200 questions about their experiences with Racism (White Supremacy), to help us in the process of eliminating it. Also, encourage your offspring to ask you and others a lot of questions about everything, and if their questions get on your nerves, it is important that you don't let them see that it does. If you do not know the answer, tell them.

My reason for posting the quote is so that Victims of Racism should take note, that it applies to the position that the managers of the system of Racism / White Supremacy are constantly working to keep us in. I think that my Dad's objective when he was a so-called revolutionary was to attempt to get the Racists in that position. We have to get effective numbers of people ( "non-white"first and "white" second) to force the "hearts and minds" of the Racist (White Supremacists) to stop all unjust actions.

A lot of you will disagree but, we have to get effective numbers of "non-white" people to start thinking, speaking, and acting in a manner that would have the other two types of people in the known universe "by the balls".

One example of this is the Counter-Racist Action known as the Montgomery Bus Boycott of 1955. The bus system in Montgomery, Alabama, received most of its financial support from "black" people, and at the same time, promoted unjust policies that mistreated "non-white" people on the basis of skin color. The boycott was a planned action produced by the Council Of Federated Organizations, which was a coalition of groups who had unified to make an attempt to end that mistreatment.

The catalyst that prompted this boycott was not an emotional reaction initiated by an "ol' black lady, who was jus' too tired to move her lil ol' legs". The Racists had influenced my mind heavily, in the second major area of people activity known as Education to believe that Rosa Parks got upset on the spur of the moment and refused to comply with the "white" bus driver. I believed that the majority of these so-called "Civil Rights" actions were founded on emotion. But, I have learned that they were well-planned and calculating forms of resistance.

There were some situations that were a spur of the moment "emotional outburst" from a "non-white" person. It appears to me that one of them may have been the earlier "seat refusal" in Montgomery, Alabama by Claudette Colvin, which occurred nine months before the Rosa Park's situation. The Council Of Federated Organizations decided not to rally to support Ms. Colvin, because of political reasons that could have affected the outcome of its objective. I read that this decision was made because people would have been less sympathetic to the cause, because she was 15 years old, dark-skinned, unmarried, and pregnant. Wow! The standards of today have not changed much since then. 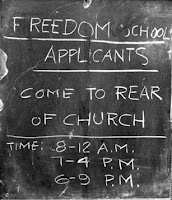 Most of the participants in the movement at that time took classes that gave them training in what is called direct action. They called such places, Freedom Schools.

When those "black" people reacted on the thought that they could force the bus system to change its unjust policies, by not riding its buses, they used alternative forms of transportation. They had the whole bus system "by the balls", because it could no longer function efficiently without their financial support. This "by the balls" attitude eliminated that Racist Action.

Today, a lot of the "direct action" techniques that were used back then to resist Racist actions, are still used today, by huge numbers of "white" people to solve some of the other "problems" of the world. You know the kind.......Environmental, Animal Rights, Abortion, Same Sex Marriage, Homelessness, Obama-ism, etc.

Yes, I said Obama-ism. That's what all of this "tea party" stuff has been about. They are using "direct action" to get Racist Suspects elected and make decisions that more than likely will produce injustice. They call themselves the "Tea Party" in remembrance of the Boston Tea Party, a "direct action" launched against the "British Government",  which is known as the "United Kingdom" today. From my observation these modern "tea party goers", do not have the best interest of "non-white" people.

Let's start thinking about how we can get Racism (White Supremacy) "by the balls". Review the history of all of the Counter Racists (Malcolm, King, DuBois, Garvey, etc) who came before us. Of course they didn't use this term to describe themselves, but it is what they were doing.

Stay strong in the struggle to Replace White Supremacy With Justice !
Posted by Khalif "SynQ" Muhammad at 20:57 No comments: