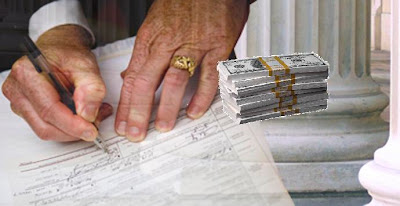 On November 18, 2009, Shukree Simmons, a "black" male, and his business partner were driving from Macon, Georgia, back to Atlanta after selling his truck for $3,700. While traveling though Lamar County, Mr. Simmons was pulled over by two Enforcement Officials who did not give a reason for the stop. Mr. Simmons and his business partner, went through the usual questioning that so many "non-white" people go through when encountering Enforcement Officials. The Enforcement Officials searched both of them and the car. The search even included using a sniffing dog, but no evidence for the type of behavior that could lead to Greater Confinement was found.

Not accepting Mr. Simmons’ explanation that he acquired his money from the sale of his truck, the Enforcement Officials decided to confiscate the $3,700 on the suspicion that the cash was acquired from criminal actions committed by Mr. Simmons. They have this authority under the "Georgia" Civil Asset Forfeiture Code. They then allowed their victims to leave.

As soon as he was able to do so, Mr. Simmons mailed to the Enforcement Officials, the evidence (bill of sale and title for the truck)that proves how he got the money.  Mr. Simmons was informed that he had to file a "legal claim" to get his money back.

Now, consider this position that the system of Racism (White Supremacy) puts its victims in. Here is a situation where a "non-white" person has to PROVE that their money is rightfully theirs and that it was acquired through legitimate business practices, after it had been taken from that "non-white" person WITHOUT PROOF that it was not their money or that it had been earned illegitimately. I suspect that for most "non-white" people, it would have stopped there. Seeing that so many of us have a general lack in our behavior for meeting deadlines, researching, filling out paperwork, etc. Can you imagine how many "non-white" people placed in this same position, would give up on this?  Considering, all of the general things that one needs to say and do when dealing with this law?

[b][i]"(n) If the estimated value of personal property seized is $25,000.00 or less, the district attorney may elect to proceed under the provisions of this subsection in the following manner:

(1) Notice of the seizure of such property shall be posted in a prominent location in the courthouse of the county in which the property was seized. Such notice shall include a description of the property, the date and place of seizure, the conduct giving rise to forfeiture, a statement that the owner of such property has 30 days within which a claim must be filed, and the violation of law alleged;

(2) A copy of the notice, which shall include a statement that the owner of such property has 30 days within which a claim must be filed, shall be served upon an owner, interest holder, or person in possession of the property at the time of seizure as provided in subsection (i) of this Code section and shall be published for at least three successive weeks in a newspaper of general circulation in the county where the seizure was made;

(3) The owner or interest holder may file a claim within 30 days after the second publication of the notice of forfeiture by sending the claim to the seizing law enforcement agency and to the district attorney by certified mail or statutory overnight delivery, return receipt requested;

(4) The claim must be signed by the owner or interest holder under penalty of perjury and must set forth:

(A) The caption of the proceedings as set forth on the notice of pending forfeiture and the name of the claimant;

(B) The address at which the claimant will accept mail;

(C) The nature and extent of the claimant́s interest in the property;

(D) The date, identity of the transferor, and circumstances of the claimant́s acquisition of the interest in the property;

(E) The specific provision of this Code section relied on in asserting that the property is not subject to forfeiture;

(F) All essential facts supporting each assertion; and

(5) If a claim is filed, the district attorney shall file a complaint for forfeiture as provided in subsection (o) or (p) of this Code section within 30 days of the actual receipt of the claim. A person who files a claim shall be joined as a party; and

(6) If no claim is filed within 30 days after the second publication of the notice of forfeiture, all right, title, and interest in the property is forfeited to the state and the district attorney shall dispose of the property as provided in subsection (u) of this Code section."
[/i][/b]

I listed the specific part of this law, that says what a person has to do in order to get their money back. You can view the whole law at the link listed above. It was easy for me to find it on the computer. How many "non-white" people don't have a computer? How many don't know what to do with a computer in order to find it? How many can't afford internet access? How many would know where to find this law without a computer? How many would think to check a law library? or the regular library for that matter. Most would probably think that they would have to get a lawyer, and then the next thought would probably be that they can't afford a lawyer. In Georgia, a basic retainer fee (the down payment to get the lawyer started on your case) is $5,000.

Do most VsOR have access to this kind of money? In the case of Mr.Simmons', he'd have to spend more money to get the attorney, then the amount of money that he is attempting to get back.

Regardless of this fact, Mr. Simmons, spoke to a lawyer anyway. That lawyer gave him some constructive information telling him that he should contact the ACLU.

According to the ACLU, which took Simmons' case in December 2009, they "sent a letter to Lamar County Sheriff Larry Waller asserting Mr. Simmons’s right to the money and seeking its return. Waller responded that he agreed that the state had no right to the funds, but directed Mr. Simmons to initiate a claim. The ACLU pushed back, and in early January the Sheriff returned the money to Mr. Simmons."

These "Asset forfeiture laws" have created an opportunity for Enforcement Officials to acquire huge profits, I suspect most of which came from Victims of Racism. The total amount acquired by use of these "Asset forfeiture laws" in 2003, was $38,330,861.00 in "Georgia" alone. Imagine whats going on in the other "states". The ACLU says in  its article that "Georgia’s law permits one-third of seizure proceeds to return to local law enforcement, which can be used for any law enforcement purpose except for the payment of salaries or rewards. The rest of the money goes into the local general fund, and must be used for programs such as drug treatment and witness protection. However, in Georgia and most other states, if police want access to more of the money for their budgets, they may turn over a drug-related seizure to the D.E.A., thereby federalizing the seizure. The DEA 'does the paperwork', handles any claims to the money by individuals (who must sue in federal court), and returns 80 percent of the money to the police, with no state law strings attached. Police may then use the funds for any law enforcement purpose, including payment of salaries. This process, known as equitable sharing, permits local law enforcement to do an end run around state civil asset forfeiture laws."

The ACLU also said in their article that "Reports from other asset forfeiture cases in the media and in lawsuits indicate that police do not seize assets from all equally. Instead, they target those persons they associate with criminal behavior and drug trafficking. The result is a regime of racial profiling of black and Latino drivers on the highways, who are stopped and stripped of their money based on minimal or non-existent evidence.

Mr. Simmons' case demonstrates the extent to which civil asset forfeiture laws, formed to assist officers in fighting drug crimes, are misused against people of color in cases in which there is no evidence of criminal activity. Mr. Simmons was never arrested and never charged. Instead, the Sheriff's department took his money, admitted that it has no right to keep the money, and told Mr. Simmons that he must make a legal claim to get it back. The ACLU seeks to challenge this and other civil asset forfeiture law abuses. The era of easy money for police departments by wrongfully taking cash from vulnerable drivers must end."

In my opinion one reason that has probably made it easy for Enforcement Officials to seize people's money when there was no correct reason to seize it, was because the individuals involved my have consented to having their vehicles searched. They probably were thinking, "I don't have anything to hide", and let the Enforcement Officials conduct a search. I used to do it all of the time, until it downed on me that these searches take a lot of time, are embarrassing, and can be humiliating as well. Sometimes they unscrew the seats! Many of my days have been ruined because of these kind of stops. Sticking with the constitution , you can say no to the Enforcement Officials searching your vehicle. As long as you do not have any felonies. In most states if you have a felony, many of the constitutional laws don't apply to you. I suspect that this one of the reasons why many "non-white" people, are persuaded (through Racist Propaganda) to practice the type of behavior that leads them to acquire felonies. Anyway, if your money is in your glove box, or in a brief case, or even an envelope inside your car, and you say no to a search, you should be in the clear of keeping your money. I ain't no lawyer, just a Victim of Racism, making a suggestion.
Posted by Khalif "SynQ" Muhammad at 07:52 No comments: