you definitely should be reading it.

I remember back in 2010, an associate of mine ended up in Greater Confinement (Prison). He had been in and out (not without my offering suggestions for staying out) since I had met him in 2004. He was really into the teachings of the Hon. Elijah Muhammad, well only into studying it, not practicing it. Anyway, in 2005 he went to Greater Confinement and asked if I could send him a Message To The Blackman by Elijah Muhammad, which qualifies as authorized reading material in there. I had already given him one before he went in, so I mailed him a copy of The United Independent Compensatory Code by Neely Fuller Jr, instead.

The Enforcement Officials (E.O's.) sent it back stating that they'll only accept books that are shipped to them from Amazon.com. So, I used Amazon to ship a copy of Message To The Blackman (because he kept asking for it) and The U.I.C.C.S.C. together. The Enforcement Officials shipped the U.I.C.C.S.C. back to the seller, and the seller (who turned out to be Mr. Edward Williams by the way) notified me by email. I spoke with him and he said that Mr.Fuller told him that they will not allow the code book in there.

Mr. Williams sent me the whole returned package. It had a sticker on it (from the E.O's.)stating that the reason for their returning it was because of a CD within the pages. Mr. Williams had placed a CD of Fuller speaking, within the pages. I didn't ask Mr. Williams why he put it in there, but I assumed that, was the real reason that the Enforcement Officials had sent the book back.

Okay, it's 2012 and another black male that I know is in Greater Confinement. I sent the U.I.C.C.S.C. to him and the Enforcement Officials there returned it too! I took a photo of it this time. I blurred out his name for privacy reasons. But, left the address to the facility visible. 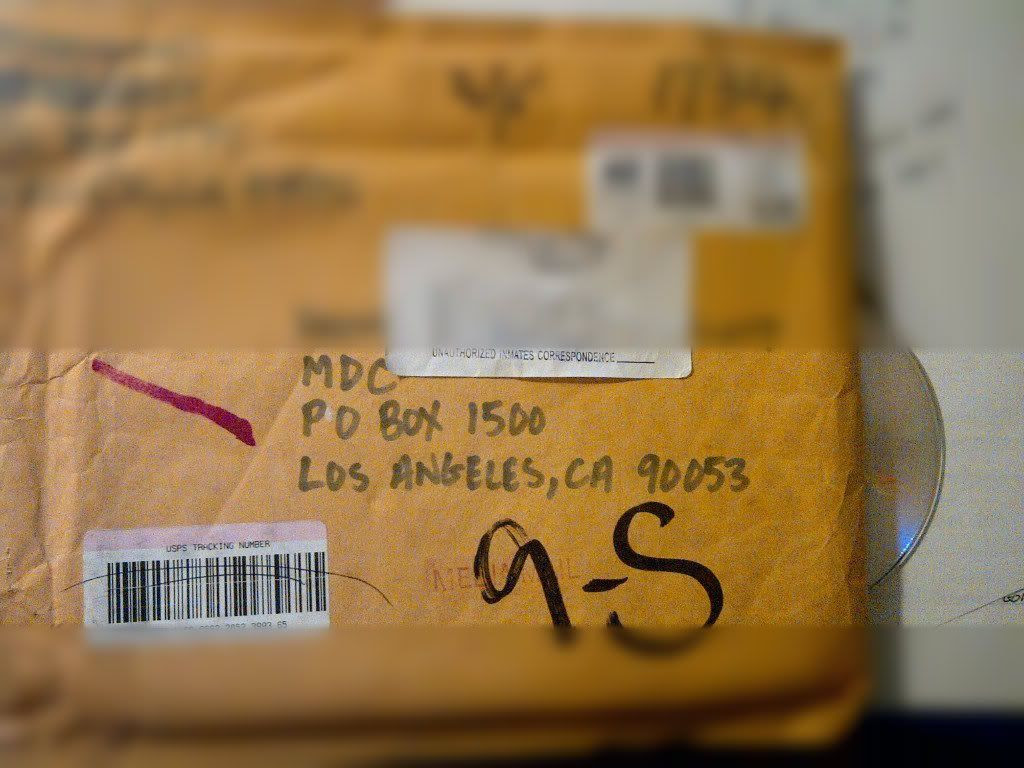 The next photo is of the sticker with the option "REFUSED UNAPPROVED MAIL" check marked. 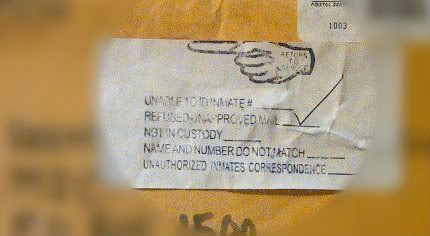 Now, they are not out right denying this material, because that would be a violation of the "prisoner's" civil rights. The key is to use deception by constantly requesting that you meet there standards for the material being sent. After the code was returned, the "black" male that I sent it to, wrote back saying do not send him any "black militant material or anything along those lines" ( I'm paraphrasing, because my attempted wife misplaced the letter), because it may affect his case. I found that to be interesting since his case is about committing fraud, which has absolutely nothing to do with practicing the code. I could easily challenge him (them really), by asking how is it that the U.I.C.C.S.C. would be considered "black militant material or anything along those lines"? However, is it worth my time and energy? No, because it is not my duty to ram the code down anyone's throat. I do suspect that the E.O's. put pressure on him about receiving such the U.I.C.C./S./C.