The Business Insider reports that "Judge Edith Jones of the 5th U.S. Circuit Court of Appeals based in New Orleans addressed the University of Pennsylvania law school on Feb. 20. Her comments were not recorded, but five students and one attorney who were in attendance signed affidavits on what was said. Those were used to generate a 12-page complaint filed in New Orleans stating that Jones 'has engaged in conduct that is prejudicial to the effective and expeditious administration of the business of the courts, undermines public confidence in the integrity and impartiality of the judiciary, and creates a strong appearance of impropriety.' Jones is accused of saying that certain 'racial groups like African-Americans and Hispanics are predisposed to crime,' and are 'prone to commit acts of violence' and be involved in more violent and "heinous" crimes than people of other ethnicities." 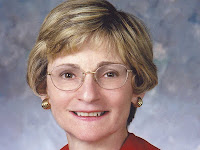 Judge Edith H. Jones
515 Rusk Avenue, Room 12505
Houston, TX 77002-2655
713-250-5484
Here is another opportunity for Counter Racists to discuss the so-called "race" issue. Please remember not to use terms like "African-Americans" and "Hispanics" in your discussions.
A smart Racist Suspect can get plenty of mileage out of confusing you with these terms and get you going around in circles ( on a tangent) about who is and isn't considered "African-American" and / or "Hispanic", because in reality there are both "White" and "Non-white" people who call themselves  "African-Americans" and / or "Hispanics". This tactic could waste all of your time, and thus turn your attempt at having a constructive dialog into nothing.
To nip that confusion in the bud, use terms like Victims Of Racism / White Supremacy ("Non-white" people) and Racists Suspects ("White" people) or "White" people and Racists (White Supremacists) instead.
Is there any truth to Victims Of Racism being predisposed to crime?
Of course there is!
The greatest crime that has ever existed that we are predisposed to is the system of injustice that we call Racism (White Supremacy).
As far as Judge Edith H. Jones goes? Every case that she has ever been involved in should be re-looked at, and all people both "White" and "Non-white" should be politely questioned about her behavior towards "Non-white" people.
In fact, one or more Counter Racists who take on this endeavor could make a little money doing it, because Counter Racism should be a business, like Racism is a business.
Take all of your information collected on Judge Edith H. Jones regarding her behavior towards "Non-white" people, organize it into a report or a book, or a video and sell it. Cha ching!
But wait, we can't single her out, that would be discrimination. We need to look at the cases of all of the judges everywhere. Why? Because you never know what a person is thinking until you study their behavior. Most of the worst ones never tell you that they're mistreating you.
Stay strong in the struggle to R.W.S.W.J. !
Posted by Khalif "SynQ" Muhammad at 23:11