One of the areas that Racism (White Supremacy) has affected us  ("black" people) tremendously in, is our spiritual connection with our ancestors. The White Supremacists erased Ancestor Veneration from the minds of their captives (our enslaved ancestors) centuries ago, and not only forbid it, but used extreme deception and violence to keep this process from reaching most of us today. Many of us don't know how powerful this process can make us spiritually. I suspect that it helped to strengthen that will of those slaves who rebelled against their masters in "Haiti", "Cuba", "Brazil,", "Jamaica", and all of the other places on this side of the planet where the slaves fought for their freedom out of Greater Confinement.

"Ancestral Veneration is the belief that our bodies are containers of an energy that doesn't die after we stop breathing air. It is a belief that the spirits of our dead loved ones still exist. And committing yourself to providing them with constant happiness, love, respect, and devotion, shows them that you still care for their well-being even in the spirit realm ("heaven"). It builds on the unity of family and lineage because it establishes a legacy of inner strength that can't be messed with. Though our ancestors possess more spiritual power than they did when they were physically with us, and it can help increase the will to eliminate it, it still remains to be seen if it is powerful enough to replace white supremacy with justice.  I can bare witness that our ancestors have the ability to interact and affect the existence of those still breathing, because it has happened to me"- Khalif Muhammad

But, because White Supremacy exists, their ancestors are classified as "White" and have mistreated "Non-white" people (our ancestors) on the basis of skin color when they were breathing air.

That so-called color line makes a world of difference on the psyche of your mind if you're a "non-white" person in a system of White Supremacy. I mean we know that Racism (White Supremacy) drives us to drink, smoke, do drugs, kill, etc. just to try to relieve ourselves from its affects, even if it's temporary. Those things however our destructive to ourselves and others. We need something constructive to help fill the void of spiritual weakness that many of us experience from believing in the Religion of White Supremacy from birth.

These facts will reveal themselves to your mind if you admit and accept the truth (that which is). The truth is there buried under all of that spookism that the White Supremacists have taught you. I've seen "black" people get all agitated and scared when they've seen my "Egun" (ancestral shrine). They get to hollering that "You're worshiping the devil and the dead!" crap. Yet, these same ones won't hesitate to celebrate George Washington's birthday or talk about what a great person Abraham Lincoln was. Huge numbers of "black" folks see no problem with the Racists / White Supremacists having "eternal flames" lit to honor their dead. But, let them see a candle lit to honor their own dead? there's a problem. Oops, there's an exception, some of us will pile up a gang of candles out on the street were a loved one was killed (no disrespect them), but what I am talking about is this: 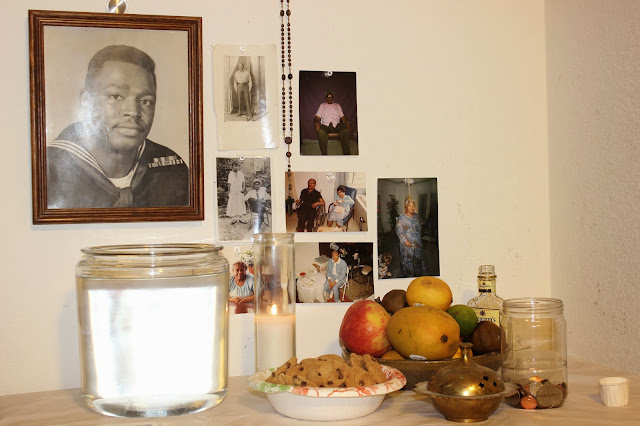 This is my "Egun" and having it is one of the things that keeps me sane while under the system of Racism (White Supremacy). My "Egun" are those who came before me, and whose shoulders I stand on. I wouldn't be here behaving in a constructive manner if it weren't for the things that they did to lay down the foundation. I am forever grateful to them. "Egun" is short for "Egungun' which means ancestors in the Yoruba language. It truly helps to speak to them because they listen to you!!!

I can't explain the tremendous strength of identity that comes from having one. Most people around the world have something similar and you should too. As mentioned earlier in this piece, it doesn't appear powerful enough to eliminate Racism (White Supremacy), but it can help you stay focused on eliminating it. Stay Strong In Your Struggle To Replace White Supremacy With Justice!