"...Hayti (is) the glory of the blacks and terror of tyrants...I hope that she may be united, keeping a strict look-out for tyrants, for if they get the least chance to injure her, they will avail themselves of it...But one thing which gives me joy is, that they (the Haitians) are men (and women) who would be cut off to a man before they would yield to the combined forces of the whole world-----in fact, if the whole world was combined against them it could not do anything with them..." ---David Walker


There is some kind of  Racist interest in "Haiti". Some years ago the Racists (White Supremacists) removed Jean-Claude Aristide who was literally selected by the Racist Liberals to be "President of Haiti" in 1991. Back then for some reason the Racist Conservatives were against it. 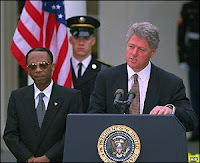 Anyway, the "Haitian" military did not go for it and in-acted a coup in September 1991, taking Aristide out as "President of Haiti". However, the Racist Liberals used the threat of violence against the "Haitian" military, and Aristide became "President of Haiti" again from 1994 to 1996 and then from 2001 to 2004. In February 2004, the Racist Conservatives, used the threat of violence to remove him, by literally kidnapping him from his residence and dropping him off in "Africa".

It appeared to me that like Saddam Hussein, Manual Noriega, Idi Amin, Robert Mugabe, Muammar Quadafi, and many other Victims (of what I call Racist {White Supremacist} Ventriloquism), who have been removed, killed, or sanctioned, Aristide no longer wanted to be a their puppet. He attempted to cut the strings and forgot who made him president.

Usually, when this type of activity is observed, it means that the area is either of strategic importance or their is a particular resource that the Racists must maintain control over. "Haiti" has a few reasons:

The first is that it was the first so-called "Black Republic" or "Nation" on this planet. According to His-Story, it achieved victory over its oppressors while the rest of the "non-white" people were enslaved on the rest of the planet. It's rebellion inspired other slaves to rebel and caused the ruling class "white" people (leaders of "Britain", "France", "Spain", etc.) to stop fighting each other and unify their efforts against "Haiti". I suspect that from that day on "Haiti" had to appear to the rest of the world as an example of "how niggers can mess up a country".

The second is that geographically and militarily, it is very close to the habitat of the most powerful Racists (White Supremacists) in what they call the "North Western Hemisphere". Which means that it holds value as a place that cannot have effective numbers of people working against them.

The third which just came to me as I sit here looking at George Bush's involvement in this, must be resources. If he gets involved, its got to be connected to Oil. Yep. Sure enough.

"Haiti" has a huge Oil Reserve that has remained untapped for a decades.

The CIA World Fact book ranks "Haiti" as 163 on the list of areas that has a "stock of proved reserves of crude oil in barrels (bbl). Proved reserves are those quantities of petroleum which, by analysis of geological and engineering data, can be estimated with a high degree of confidence to be commercially recoverable from a given date forward, from known reservoirs and under current economic conditions."

The current "President of Haiti", Rene Preval, is a member of the "National Institute for Mineral Resources". He is who the Racists (White Supremacists) have replaced Aristide with.

I predict that "Haiti" is about to under go

Racial Show Casing -Preval and his "wife" Elizabeth) will be very popular after this event is over. Thousands of "non-white" people will almost over night appear to be successful all over "Haiti" in the months that will follow.

Racial Population Tailoring- This is what is happening in "Haiti" right now. Will it be millions of people found dead? or hundreds of thousands found dead?  I don't know. But, it will be enough to allow the Racists to have instant control of the areas where "non-white" people had spent a lot of time and energy.

I suspect that the Racists (White Supremacists) have caused this earthquake.

"Earthquakes induced by human activity have been documented in a few locations in the United States, Japan, and Canada. The cause was injection of fluids into deep wells for waste disposal and secondary recovery of oil, and the use of reservoirs for water supplies. Most of these earthquakes were minor. The largest and most widely known resulted from fluid injection at the Rocky Mountain Arsenal near Denver, Colorado. In 1967, an earthquake of magnitude 5.5 followed a series of smaller earthquakes. Injection had been discontinued at the site in the previous year once the link between the fluid injection and the earlier series of earthquakes was established. (Nicholson, Craig and Wesson, R.L., 1990, Earthquake Hazard Associated with Deep Well Injection--A Report to the U.S. Environmental Protection Agency: U.S. Geological Survey Bulletin 1951, 74 p.)"-  USGS

"Scientists at the U.S. Geological Survey (USGS) say that oil production can cause earthquakes," - source wiki.answers.com

"Here's how it works: With high-tech equipment, oil companies pinpoint oil-rich areas and use large drills to puncture the surface below the sea, sometimes as deep as 10,000 feet. As this pricey fluid gets sucked from the sediment pores, the surrounding rocks shift positions to fill in the newly vacated spaces. At a large scale, for example the volume displaced when millions of barrels of oil are produced, the land movement can actually cause a mini-seismic earthquake, according to Robert Morton, a USGS coastal geologist." - source wiki.answers.com

Five ways to cause man made earthquakes

Racial Dislocation Many of the "Haitian" people have already been dislocated, and will be relocated to the "Dominican Republic". There they will be placed in tents and trailers and most of them will remain there.

"Haiti" is about to under go a huge face lift right now. Hundreds of Millions of dollars are about to be invested into rebuilding its infrastructure. Big corporate contracts in whatever industries that benefited from the War in Iraq and in Katrina. Possibly the same companies that were involved in the rebuilding of those areas.

I could see a Racist Suspect responding to this, by saying that "its a new day", and that "SynQ is paranoid". Well whatever, time and time again, when the Racists get involved in "helping" huge numbers of "non-white" people history has revealed that it usually involved some kind of deception on the part of the Racists.