CONSTRUCTIVE INFORMATION: RACIST PROPAGANDA is based on excerpts from the out of print book, entitled "The Fine Art of Propaganda; A Study of Father Coughlin's Speeches" by The Institute for Propaganda Analysis.

ATTENTION: This article is a supplement to THE UNITED INDEPENDENT COMPENSATORY CODE / SYSTEM / CONCEPT a textbook / workbook for thought, speech, and / or action for Victims of Racism (White Supremacy) written by Neely Fuller Jr. I recommend that you read it, in order to get a better understanding of this concept. From here on out I will refer to it as the U.I.C.C.S.C.
“The seeds of the destruction of Racism (White Supremacy) are implanted in the very existence of Racism itself.” – Neely Fuller Jr.

If it has any affect on motivating effective numbers of people to make an attempt at resisting Racism (White Supremacy), and / or if it reveals truth, promotes justice, and makes sure that the person who needs help gets the most constructive help that they need it should be recognized as Counter-Racist Propaganda.

The Racist Propagandist attempts to influence the minds of people into co-operating with Racism (White Supremacy). They do not want their victims to carefully scrutinize and be critical of the words and images that they use. Their ultimate objective is to move you to continue to behave (think, speak, and / or act) in a specific way that is not constructive in replacing Racism (White Supremacy) with Justice. It will be a challenge, but, I suspect that Racist Propaganda can be spotted if one follows the logic. 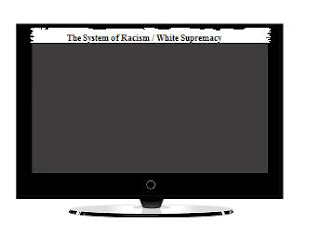 Right now we are bombarded with so much propaganda, coming at us from every direction, that we will not start to see more of it, until we start questioning everything. The television is the main source of it all. I heard Dr. Welsing say that every Victim of Racism should take a strip of paper with the words “THE SYSTEM OF RACISM (WHITE SUPREMACY)” on it and put it right over the screen so that we could constantly be reminded of what we are looking at. I totally agree with her. So start by questioning everything that you see on the television. In addition to that you should put that same kind of strip on your radio as well.

Let’s look at the methods of propaganda. Some of the terms that were developed to describe these methods were confusing to me, so I have changed them to make them reveal the truth of what they describe. Where the term is confusing to me, I will add my compensatory functional term, and give my reasons for making the change. I will list all of the methods here first and then write about each one separately.

Here are the methods of propaganda: