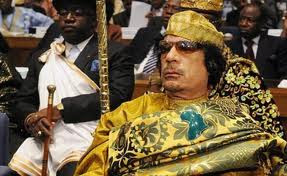 Since the time that I learned about "Africa" (somewhere between 6 and 8 years old), I've known Muammar Qaddafi (based on the evidence) to be a Justice Promoter for the people of this planet and more specifically "non-white" people. I've wanted to write about him since the day that I found out the truth of his murder. But, like the death of my Dad, I've found it difficult to face. Qaddafi was a strong supporter of our struggles all over the planet. Please know that he had a lot of sympathy for "Black" people and reached out to support many projects that appeared to be headed in the direction of Justice. I do not know what other "black" groups that he financially supported here in the so-called United States, but I do know that he gave money ( five million a year, I think) to the Nation Of Islam under the "leadership" of Elijah Muhammad, and also while it was under the "leadership" of Louis Farrakhan. Qaddafi was, next to Robert Mugabe, one of the last of the well-known fighters for Justice from the old school. Mugabe is probably next on their hit list. The Racists (White Supremacists) in "Zimbabwe" have been after him for sometime.

I suspect that Qaddafi was smart in his process of keeping them at bay for 42 years, until he was duped by the selection of a "Black" president. I've always said that his selection would allow White Supremacist actions to be committed all over the world, and there would not be any claim that it was Racism, because of it. His selection makes many "non-white" people put their defense down. At first he was welcomed and supported by them in 1969, because of the oil reserves that are in that area of the world. He received support from the "Communist" White Supremacists and the "Capitalist" White Supremacists, but he attempted to use them for the benefit of "Libya". They did not like that. I do not agree with the news reports that said Libya had anything to do with the violence committed in "Europe", that the White Supremacists say they were involved in. Back in the day, when journalism was about presenting just the facts (meaning both sides of the story so that you could draw your own conclusions),Qaddafi had denied being involved in those attacks and challenged them to prove it. They never did. Reagan called for an air strike that killed his step child.

During the Seventies and Eighties he had a lot of influence with OPEC. That influence caused the White Supremacists a lot of problems, because they depended on the oil that came from the members of OPEC. Qaddafi was the first amongst the OPEC members to raise the cost of "Libya's" share of the oil (see "Gaddafi's oil revolution").

Key words and quotes from the above link:


"All what happened in OPEC took place, thanks to what Gaddafi did. Gaddafi started the whole process of change." said Fadhil Chalabi, the former deputy head of the oil producers' cartel, OPEC.

The article continues to say that "The Libyan leader came to power by military coup in 1969. And he resolved to end the old colonial relationship between the oil companies and Libya. Gaddafi demanded a higher price for Libyan oil and a majority share of the revenues."

His stance prompted the other OPEC members to raise their prices as well. He's been an open enemy to White Supremacy ever since.

As far as I can tell, Qaddafi used the wealth generated from that Oil to support other groups of "non-white" people around the planet, some of them deemed "Terrorists". Being a "Terrorist" all depends on whose telling the story. The one deemed the "Terrorist" never refers to their self as such. Like many of these "freedom fighters", I thought that fighting for "freedom" was the key. We all were using the incorrect word. The correct word is Justice!

This video is about Qaddafi's plan to financial stabilize so-called "Africa".

The Victim Of White Supremacy in this video offers his view on what's really going on.

Pay close attention to Qaddafi's words in this one.

This one is extremely graphic and is saddening for those of us whom appreciated Qaddafi's attempt to promote Justice and reveal truth.