Crabs In A Barrell part Two 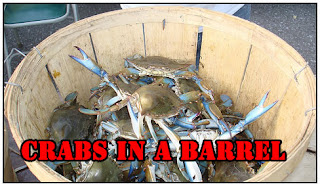 What do I mean by "Crabs in a barrel"? It comes from the fact that crab fishermen don't have to put a lid on top of a barrel of crabs, because the crabs will pull each other down, as they struggle to get out of the barrel. Such behavior is a characteristic of many Victims Of Racism.


We'll here is another crabs in a barrel moment- I like to start my day at 530a, every day. I agree with society (The Racist White Supremacists) when they say that in order for something to become a habit, I must do it every day for at least 30 days in a row. See the thing about niggers is that, they've been trained (by the White Supremacists) to dislike seeing another "Non-white" person do constructive things for themselves or others. Jealousy and Envy are two emotions that fuel The Nigger Within- a term that I made to describe that slave mentality behavior that has been passed down from generation to generation. It is but, one of the major problems that affect "Non-white" people all over the planet Earth.

It is also the first enemy amongst our enemies that must be overcome in our start towards eliminating this system of Injustice, that we inhabit (behave in). Where does this tie into to 530 a.m.? Waking up at this time helps my day be more effective, because at that time everyone else in the house is still asleep. That is important because everyone else in the house, is not conscious to the fact (or does not care) that we are in a system of Racism (White Supremacy). I need quiet time to think about how the system works and how it should be eliminated.

My attempted wife does not read, study, listen to, or watch my material, nor any other material that has been produced by people on the subject of Racism (White Supremacy) and how it works to keep the "Non-white" people on the planet, dominated and subjugated by the Racists, at all times, in all places, and in all areas of people activity, including Economics, Education, Entertainment, Labor, Law, Politics, Religion, Sex, and War. This has been a major obstacle in my path and I truly hope that one day she comes around, before it is too late.

I suspect that anytime we are thinking, speaking, and / or acting to Replace White Supremacy With Justice, we are Resisting White Supremacy. Well on the weekends my attempted wife doesn't like to hear my alarm go off, "because it disturbs my rest" she says. Never mind the fact that she does not have a "9 to 5", Monday to Friday, like many people who look forward to resting on the weekends do. From my observation she gets rest most of the days in the week. She moves from the bed to the couch and back again. Don’t get me incorrect, she is a heart patient. I don’t expect much from her. But, my point is that if she rests all of the time, what is getting disturbed? I take our offspring to school. We eat out most of the time (extremely destructive habit), and frankly, because I leave the chores up to my “step-daughter” and she leaves the chores up to me the house doesn't get cleaned that often. Don't get all judgmental. Most of you victims don’t have your house in order either. You prefer to PRETEND that everything is okay when you know damn well that it aint. Well, I'm coming clean with my shit. Yes, I am putting it all out there, because I must reveal the truth in a manner that promotes Justice, in this case for me. The only way to de-niggerize is to recognize the truth. A fat person can't begin to lose weight until they first realize that they are in fact fat. They ain’t going to lose weight, because they don’t say the “f-word”. Okay, I know that I'm beating around the bush here, but this shit is hard to get out.

Moving on... getting up that early in the morning on a regular basis has been an objective of mine for nearly 20 years. But, the alarm setting on my phone keeps shutting off on the weekends. I’ve asked my attempted wife if she has shut it off (that’s like calling her a curse word) she says that she doesn’t. So, I was left to believe that I am crazy. I know that she changes my alarm setting, but, I can’t prove it. A GOT DAMN GHOST in the house has been turning that alarm setting off, almost every weekend for 7 years now.

Because getting up at that time has not yet become a habit, I’ve found myself subconsciously resting in the bed watching TV. on a lot of those weekends. I’ve been so caught up in things that many times I hadn’t realized that my alarm didn’t wake me at 530a that morning.

According to The Black Man’s Guide to Understanding the Black Woman- Shahrazod Ali , my attempted wife’s action is supposed to cause me to get angry. Ali says that when the “black” female wants attention from the "Black" male, she’ll do whatever it takes to get it, no matter how destructive her actions are. Ali goes further on to say that the “black” male cannot win an argument with the “black” female. Most of the time, I forget that. And there’s conflict. We end up going around in circles like a dog chasing his tail… 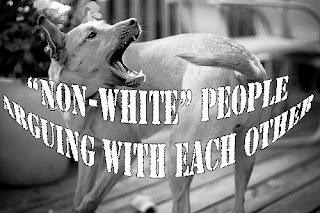 It hasn’t all been her fault. Getting up at that time was a mental fight for many years, before I met her. Back then it was only the Nigger Within that I had to deal with, plus I had other issues, that got in the way. I solved those issues a long time ago. The nigger is still here.

Okay, so Friday night 2/3, I noticed that my alarm setting had been changed yet again. I reset it and was up fresh in early writing the first “Crabs in the Barrel” piece.

Last Fri night 2/10, I was checking my alarm setting; I could see her peering at me through the corner of my eye.

“Yes, I am setting it because I got things to do in the morning.”

“Look, you know that I’ve been trying to get up at this time. It’s the time that the house is quiet and I don’t have any distractions.”

We were about to start arguing, but a flash of memory came to me. I suddenly remembered a trick that my dad learned from a Rastafarian that he shared with me when I was about 15 years old. Here’s how it works. You puff your pillow up and punch it the number of times equal to the hour that you want to wake up, and you will wake up around that time. For example, if you want to wake up at 530a, you punch your pillow five times.

She saw me punching my pillow and thought I was crazy. She was quiet. You could hear a mouse piss on cotton. She didn’t know what to say or do. She thought I was going to keep on arguing about it. So, I went to sleep.

Yesterday morning I popped up at 532a. Why was she up watching me? Smiling my way to the toilet, she says

“I told you that it would work naturally, if you gave it the chance.”

“When did you say that?”

“Yeah, okay whatever. You thought it wasn’t going to work that’s why you were watching me.”

“It didn’t work. Your body is so used to waking up at 530a that it happened automatically.”

“No. What I did worked. It’s worked for me before; I just hadn’t tried it in a long time.”

Thinking that might give her Nigger within, a chance to find a way to put a kink in it, and fearing that it might not work every time. I said “Nope, only on the weekends.”

The section on Politics pages 103 to 172 in the U.I.C.C.S.C. should be read and put into practice in order to not waste a lot of time committing errors, like the one that I made above. What I should have done was to Minimize The Conflict, by not responding to any of her statements, only asked questions when I wanted to speak to her, and got out of the room with the quickness. No contact, No conflict.

If I remember correctly, it did work for me most of the time. But, for some reason I went back to relying on outside influences to wake me. It does however prove the power of the mind. My folks and I were big on using our minds when I was growing up. Your mind is the most powerful weapon that you have and the Racists (White Supremacists) know this. That’s why they’ve done everything they can to keep us from freeing it. Next weekend try hitting your pillow the number of times to the hour that you want to wake up. Just as a test.

5a in the morning is five times or 6a, six times.7a, seven times and so on.

See what happens. The Racists White Supremacists are responsible for us being crabs in the barrel, because they say and do things that keep us believing that we have to fight each other for the few crumbs that they drop off of the table.

Stay strong in the struggle to Replace White Supremacy With Justice.