2/21/65 was The Day That Malcolm X Was Assassinated

Malcolm X was a Counter Racist. Regardless to what has been said about why he was killed and / or who killed him. He ultimately died speaking and acting against White Supremacy. Those Victims of Racism that killed him where merely puppets stringed into action, by the Racists (White Supremacists). 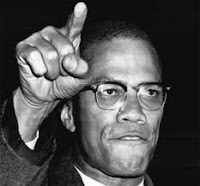 The White Supremacists are responsible for Malcolm's death. He knew that he was going to die. Any one who stands up against injustice and does the kind of action that gets their attention, will become a target. All we need is 8,000,000 "non-white" people with the same courage that Malcolm had, to think, speak, and / or act to eliminate injustice.  In Economics there is a principle called the Pareto principle, named after the Racist Suspect who made the observation. It is also known as the 80 / 20 rule. The principle is used on many different levels, but it means that 20 percent of the cause is responsible for 80 percent of the affect. There are 40 million "Black" people in the so-called US. 20 percent of that is 8,000,000. That means we need 8,000,000 people in the Counter Racist Family. 8,000,000 United-Independents. All thinking, speaking, and acting against the system of White Supremacy.

We must Minimize The Conflict that his death still causes between many of us today. It is destructive for Victims of Racism to squabble over this. The majority of us who are doing the squabbling today were born after his death. We can only go by what we're told happened on that day, and the few months proceeding it. BUT NONE OF US WERE THERE. We really don't know who killed him. There's lot's of speculation, but very little facts. I suspect that the real motive for killing Malcolm was to stop him from making a plea to the United Nations Human Rights Commission.

If White Supremacy didn't exist would Malcolm X have been killed?

The main reason that we do not have millions of "non-white" people doing this kind of work is F.E.A.R.

Fear of ending up like countless others (Malcolm and Martin's death's are the images we've been blasted with the most) who've gone up against Racism (White Supremacy). "Black" motivational speaker Les Brown, says that the best way to over come fear is to realize what it truly is:

I want to make it clear that I still have some things that I FEAR, but I am working on overcoming them. I don't like to FEAR because whatever it is that I FEAR, can control me if I am not careful. So what I do is recognize what I  FEAR, then challenge it, every chance I get, until it is no more. I meet it head on. Adapt to it then overcome it. I remember when I used to be afraid of money. Money is nothing more than a piece of paper with ink on it. but, I FEARED it, because I thought that I couldn't do with out it. The TRUTH is that I can do without money, but, I can't do without the basic things that I need money to bring, like food and water. I am no longer afraid of money, you know why? because I set fire to it! That's what I said. I set fire to it. You think I am crazy. No more crazy than a Victim of Racism in a system of White Supremacy!

First time I recognized my FEAR of money, I burned a 1.00 bill. the second time a 10.00 bill, the third time a 20.00, the fourth and final time a 100.00 bill. I am no longer in FEAR of money. It comes and it goes. I recognize it for what it really is. A tool. A representation of an energy exchange between people in a system of White Supremacy.  The system makes sure that you FEAR money and they also make sure that the money that has the most value also has "White" people on it. For the record, I am not suggesting that you burn money. What you do is what you do. Don't go around saying SynQ is telling us to do something illegal. I am not. If you have a FEAR of money, how you overcome that FEAR is your business. I am only saying what worked for me.

I no longer have a FEAR of death. Back in the day. I was in a gang and the rival gang stabbed me up three times really bad. I could have died, but I didn't. I spent a month in the hospital, being fed with liquids through one tube, while watching my waste go out another tube into a bucket that set on the side of my bed. I could have lost my existence for claiming a number. That's what we fought over. Anyway, it occurred to me that I had got caught up in something that, I knew better than to be caught up in. Anyway, I realized that if I am going to die for something let it be for justice.

History has shown us that the White Supremacists know that FEAR is an emotion that fuels the imagination.  That is why they have groups like the Ku Klukas. Everything about that group was designed to put FEAR into our minds, so that we would not help ourselves over come the affects of White Supremacy. They constantly blast us with images of "Non-white" people being mistreated for standing up against injustice, to help you imagine that doing this kind of labor could be dangerous. And history has shown us (through those same images that it has been). But these are new times, and we don't know what could happen when 8,000,000 "Black" people attempt to R.W.S.W.J. because that's never happened before. That may not be the Effective Number, but what if it is? Courage is the will, plus the ability to take action, without knowing the complete outcome of your action. Death is an inescapable event that has to be accepted in order to get passed the F.E.A.R. of Death. Once you get passed that, you can get started on the great task that has been laid before you.

Do you understand that you must get justice or die trying?

YOU ARE BEING VICTIMIZED DAY IN AND DAY OUT, IN ALL PLACES, AND AT ALL TIMES. YOU ARE GOING TO DIE ANYWAY. THEREFORE YOU SHOULD DIE WHILE TRYING TO GET JUSTICE.


In the spirit of Malcolm X and all of the others who came before you. Do something to think, speak, and act to eliminate racism (White Supremacy). Write a blog, set up a website, make videos, get a radio show, write a book, sit in, sit out, stand up, stand out, conduct counter racist experiments, do something ! There is so much that can be done.

Stay Strong In Your Struggle To Replace White Supremacy With Justice.