Art work for this comic is fantastic and the writing style is good, but the message that it sends sucks. I suspect that it is no coincidence between the title of this comic book and the Racist Code word for penis, which is "Johnson".

This comic is filled with what I call Racist Subliminal Art Messages, and they can't be called Racist, because a VOR is showcased as the writer and artist of it. I further suspect that there is a ghost writer behind it all. I have no way to prove that so I am not going to try to.

I can say from my own experience of being a VOR, that doing what a Racist Suspect tells you to do, as your employer, is what pays the bills and puts food on the table. So Trevor Von Eeden. I ain't madatcha bruh.

However, I will attempt to point out what I see in the art work and in the words of this new comic book, that "white" folks are ecstatic about. First, I want to say that I was a Fine Arts major at the University Of Alaska Anchorage, I did not have the funding to continue my education, but I learned alot about the subject of Art, as well as my acting parent who was a very constructive visual artist. He could have been one of the best, I suspect if he weren't victimized by the system of Racism (White Supremacy). I have learned a little about the concepts of Two Dimensional and Three Dimensional art design, drawing, and photography, as well as Art History and some other art subjects.

One powerful thing about Art is that it can send your brain-computer multible messages, that you consciously will not pick up on unless you know what to look for. And only if that art is created by a skilled artist will those messages send a complete message. This skill is the foundation for creating propaganda. Before I studied Art, I thought it was a gift bestowed upon a person by the All-power that a person could only be "blessed" with. And if someone created a great piece of art, it was by chance. I have observed that many VORs think the same way that I once did about art. The truth is that it is a skill just like anything else that you learn and it gets better with practice.

In the following pictures I will show you what appears to be images of sodomy.

Here's the first image that I saw: 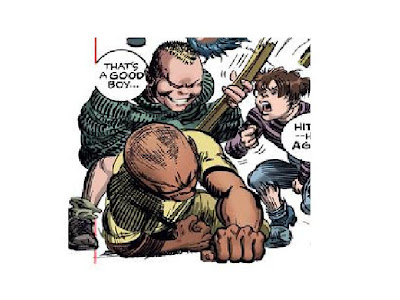 I know, some of you are probably saying

"SynQ, you pulled this one right out of your ass.!" (No pun intended.) I saw this and had to do a double take.

Remember, what I said, Art is a skill. Nothing just happens. When this kind of work is professionaly done. They have a team of editors who take a look at everything before its published. "Yeah, SynQ, but people STILL make mistakes."

Ok, so what about this one: 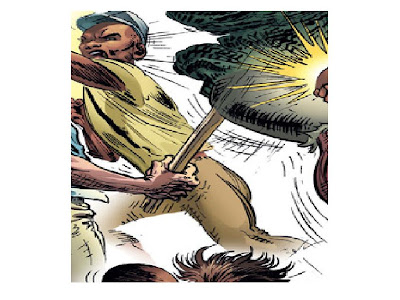 See how the stick is placed in front of young JJ's crouch? and then it leads to the butt of the other character? You even get a transparent view! Hey we are talking about "Johnsons" here. That is the theme. Is it just me? or what? It is just me? ok then. Let's move on. Now this next one is overt sodomy. When it comes to Art the Racists have been able to communicate to us with the skillful use of colors who is and who is not a "white" person. It's just when I look at real people that I have this issue. I have already learned that I can't tell if someone is a "white" person or not anyway. Check it.

I am writing about this because the character doing the raping is presumably a Racist Suspect to me, but another VOR says that he thinks this Racist Rapist is a VOR. That could be true. What do you think? 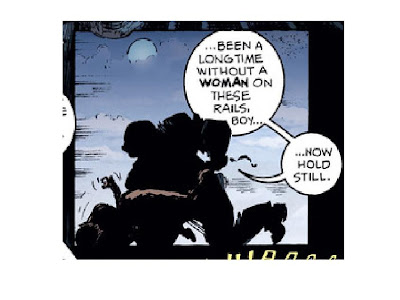 Images of "black" males being sodomized by "white" men equate to images of domination and subjugation of the victim, by the victimizer, which is Racism (White Supremacy) in my book. The Victimizer says "I can do whatever I want to do to you nigger, and there ain't nothing you can do about it!" Such anti-sexual behavior has been said to be traced back to the "Romans" and the "Greeks". Anyway, there is much more to be said about the images that I have seen in this comic book series and I will come back to it later. Stay strong in your fight to eliminate Racism / White Supremacy!