Is Everyone A Little Bit Racist?

"Why is Everybody is a little bit Racist?" study was mentioned on Racism Daily.com

The title of this article is extremely important to focus on, because it promotes confusion. Three quotes of Mr fuller came to my mind, when I saw it.


The use of words and how they are arranged, influences how we think, speak, and act.
One of the keys to understanding White Supremacy is in observing the words that are used. In this case the words "everyone" and "a little bit".

By using the word "Why" in this title it implies that everyone being Racist is a fact.
"Everyone" implies that "Non-white" people (Victims of Racism) have the will and the ability to practice Racism, just like the "White" people who choose to mistreat "Non-white" people on the basis of skin color can. Here's where the three types of people in the known universe suggestion comes in to eliminate that confusion- see page 20 in the UICCSC textbook/workbook.
To help us eliminate some of the confusion we must use the words Racism (White Supremacy). Why? because this is the only form of Racism where a person has the will and the ability to mistreat another person on the basis of skin color. In our case the person doing this kind of mistreating can only be a "White" person. Why? because we're talking about WHITE SUPREMACY. We're not talking about an idea, we're talking about a REALITY. Under the system of White Supremacy, no other kind of Racial supremacy can exist.
Implying that "everyone" is Racist, could remove the effort in the minds of those who choose to spend time and energy eliminating it, or imply to others who see others working against White Supremacy as crazy because they are wasting their time trying to eliminate something that cannot be eliminated.
These days the sophisticated White Supremacists have attempted to change the definition of the word Racist to make it apply to anyone.
They want the people of the world to believe that a Racist can look like: 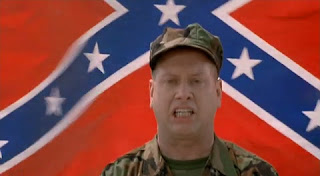 
The phrase "a little bit" tries to take the sting out of Racism. Taking the sting out of it, makes you accept it easier. Example- If someone offered you a plate full of doo doo and said "hey eat this, it's packed with lots of vitamins and minerals". Would you eat it?


However, if "a little bit" of it were in your food and you didn't know it, you'd accept it. That's what the Racists (White Supremacists) are doing to us. They are attempting to feed us "a little bit of" doodoo (deception).

Many people will not read the details of the "Everyone's A Little Bit Racist"article, they will only see the title and "run with it". Meaning they will take on the belief that people classified as "White" and "Non-white" are both "a little bit Racist". It will be accepted as a fact, because it is promoted by a University study (Georgia Tech), "scientists", and the "British Journal of Social Psychology".

This "Why is Everybody is a little bit Racist?" study could make many "White" people feel comfortable being Racists. It could also be used constructively as evidence to support "counter racist work".

I don't know about you, but, I have to read an article three to five times before I get the full meaning of it, because White Supremacy has Victimized me so thoroughly, in its use of words, that I get confused real fast. Sometimes, if I don't understand a word, I will be confused by the whole sentence. That's why I keep a dictionary handy.

This same kind of confusion can apply to a video as well. I have read comments posted on my youtube videos, where people use their words in ways that make me believe that they've read the title and watched the entire video, but, think that other viewers are only going to read the title. So they deliberately make a negative comment about the video, to deceive you into thinking that the video is about something other than what the video is actually about. That way you will not learn the truth about the video. Others have formulated an assumption based on the title, but have either watched a portion of the video, or none of it at all. I have observed this behavior on many occasions. Sometimes I will respond asking if they watched the entire video, because their comment will have absolutely nothing to do with the content of the video.  The point is if you only go by the title of the information, you could miss out on some constructive information and therefore be confused about what's really going on. Like the title of this study.


The "Why is Everybody is a little bit Racist?" study is constructive in that it does say that Racism has to do with how we behave. This is absolutely true. It says culture as the culprit. Culture = Behavior.

The logic says that culture is nothing more that what you say or do, or what you don't say or do. it mentions "society" as being the blame. "Society" is the Racist/White Supremacists. I had to watch this video about five times before I could really understand what he is saying. R.W.S.W.J.