Recent Supreme Court Decisions That May Affect You If You're A Victim Of Racism: 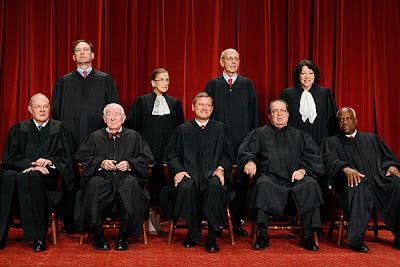 "The Supreme Court’s decision [recently], in Maryland v. King, was its first to squarely address DNA collection and databanking. While that decision said nothing explicit about the authority of local law enforcement to keep DNA databases, it could well encourage local jurisdictions to push ahead, several experts said."- Goldstein, Joseph (2013, June 12). Police Agencies Are Assembling Records of DNA. Retrieved from  www.nytimes.com


Using DNA to solve crimes is constructive in that it helps to keep unjustly accused people from going to Greater Confinement. Huge numbers of Victims Of Racism with "life" and death sentences have been released because of DNA. I am an advocate for its use. However, it's misuse can lead back to putting innocent people in Greater Confinement. The Supreme Court's decision has allowed the door to remain open for this.

SUGGESTION: click on the above link and read the NY times article.

"misuse of DNA" or "Human Rights and DNA"

or a combination of these terms, in order to gain more information about this. You could always come up with your own combinations.


"The Supreme Court on Tuesday effectively struck down the heart of the Voting Rights Act of 1965 by a 5-to-4 vote, freeing nine states, mostly in the South, to change their election laws without advance federal approval."- Liptak, Adam (2013, June 25) Supreme Court Invalidates Key Part of Voting Rights Act. Retrieved from www.nytimes.com

"Citizens in a liberal democratic society, at least in theory, can more readily influence their key decision-makers, express their voice and stake in local decision-making, and manifest their pleasure (or displeasure) with their representative government. The basic civic act of voting in a democracy, then, is clearly a simple but crucial tool for changemaking. Yet in far too many democracies, voting can range between a metaphorical “check-in-the-box” that absolves citizens from engaging meaningfully in the issues and the candidates to an outright charade and mockery of representative government."..........." the U.S. Supreme Court struck down the central pillar of the 1965 Voting Rights Act, enacted to preserve.............[the] constitutional right of a [just] and free vote for all citizens irrespective of [racial classification] or any other characteristic. This pillar, fundamentally Sections 4 and 5 of the Act, requires certain states, counties and municipalities with historic, [racist] restrictions on voter registration to “pre-clear” any changes to their election procedures with the U.S. Justice Department.............the law helped win an almost....century-long struggle to honor and enforce the 15th Amendment to the Constitution, which outlawed practices that disenfranchised [Victims Of Racism]....... the Voting Rights Act [was] a milestone, guaranteeing through the Justice Department the equal protection of an essential tool for civic participation.....Justice Ruth Bader Ginsburg wrote on page 5 of her dissent (available here) that 'today 'second-generation barriers' to racial and ethnic discrimination like racial gerrymandering and changing the procedures for local municipal elections could crop up more often and slowly chip away at the ability [for Victims Of Racism] to fully exercise their voice, in the same way that literacy tests (the 'first generation') did before. Just two hours after the ruling, Texas Attorney General Greg Abbott.....enacted that state’s voter ID law that had been ruled by federal courts last year to impose “strict, unforgiving burdens on the poor.'"- Ashoka (2013, June 27) Why Voting, And The Voting Rights Act, Should Matter To Changemakers. Retrieved from www.forbes.com

My father, Norman G. Doggett Jr (1941-2010), told me that, prior to the Voters Rights Act of 1965, the Racists would use all kind of deception, including so-called literacy tests, to exclude "Black" people from voting. They would present questions like "How many bubbles are in a bar of soap?" If the correct answer could not be produced the Victim of Racism would be barred from voting. What is the correct answer to the number of bubbles in a bar of soap?.........impossible.

To review some of the Racism that was practiced against Victims Of Racism between 1880 and 1965 click here.

SUGGESTION: click on the above links and read them thoroughly.

" Racial Gerrymandering" and "practices that disenfranchised from Voting"

or a combination of these terms, in order to gain more information about this. You could always come up with your own combinations.

You No Longer Have The Right To Remain Silent

"The court ruled that a suspect’s failure to answer a police officer’s questions before an arrest may be used against the suspect at trial. The Supreme Court has long said the Fifth Amendment’s protection against self-incrimination applies after arrest and at trial. But it had never decided, in the words of a 1980 decision, “whether or under what circumstances pre-arrest silence” in the face of questioning by law enforcement personnel is entitled to protection."- Liptak, Adam (2013, June 17) A 5-4 Ruling, One of Three, Limits Silence’s Protection. Retrieved from www.nytimes.com
The Court said "Petitioner, without being placed in custody or receiving Miranda warnings, voluntarily answered some of a police officer’s questions about a murder, but fell silent when asked whether ballistics testing would match his shotgun to shell casings found at the scene of the crime. At petitioner’s murder trial in Texas state court, and over his objection, the prosecution used his failure to answer the question as evidence of guilt. He was convicted, and both the State Court of Appeals and Court of Criminal Appeals affirmed, rejecting his claim that the prosecution’s use of his silence in its case in chief violated the Fifth Amendment. [The Court] concluded that petitioner’s Fifth Amendment claim fails because he did not expressly invoke the privilege in response to the officer’s question "
I am by no means a supporter of crimes, let alone murder. I remember Mr. Fuller telling me in a phone conversation (I'm paraphrasing) that huge numbers of "Black" people have committed so much crime, that they've done enough for all of us. Under the system of White Supremacy we are expected to commit crimes. When a crime is committed the first thing that comes to anybody's mind is that one or more "Black" people committed it. There should be an all out campaign for "Black" people to stop committing crimes. All crimes, except "begging".  It should be practiced to the point that everyone would say "A 'Black' person would never commit a crime, except maybe begging. They used to do that stuff along time ago, but not these days."
That being said there are many Victims Of Racism who have been incorrectly tried and convicted for crimes that they didn't commit, only because they didn't know how to defend themselves with their constitutional rights, like "White" people do. Now, after this ruling it just got tougher. This ruling basically says that you must actually state your 5th amendment right from the start, instead of choosing which questions to answer and which ones to be silent on when being questioned by the Enforcement Officials. Click here for the best approach to this.
SUGGESTION: click on the above links and read them thoroughly. Please, Please, Please, study what's in the last one.
Then Google search:
"The Bill Of Rights"
"The 14th and 15th amendments"
Stay Strong In The Struggle To Replace White Supremacy With Justice