"Crisis of Black Intellectuals and the Drs. Julia and Nathan Hare Archives" by Marvin X

One would think the sale of the Hare archives would be a small matter, especially when we consider that Dr. Nathan Hare is the father of Black Studies with a PhD in sociology and psychology. How many professors of Black Studies, aka Pan African Studies, Africana Studies, Diaspora Studies, Negro Studies, have benefited from the ground breaking work and sacrifice of Dr. Hare who was thrown out of Howard University (he was preceded by the removal of the great sociologist Dr. E. Franklin Frazier, author of the classic Black Bourgeoisie, Hare's writing continued the tradition of lambasting the Black bourgeoise with his now classic The Black Anglo-Saxons).


Dr. Hare was then invited to be the first chair of a Black Studies program on a major white university campus at San Francisco State College, now University. The longest strike in American academic history ensued with violence and imprisonment of protesters. In the end, Dr. Hare was removed from his chair and what followed can only be described as a watered down, Miller Lite version of Black Studies that has persisted ever since, although hundreds of "tenured nigguhs" benefited from the struggle of students and radical professors like Dr. Hare who were purged from white and negro 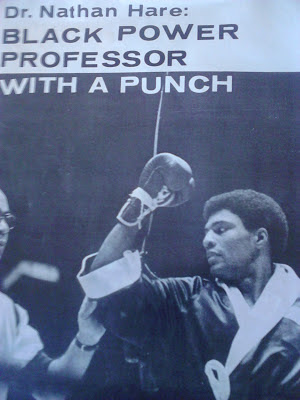 Dr. Hare bemoaned recently that is was pitiful that of the hundreds of Black Studies departments in America, not one was able to hire him, as though his blackness was simply unforgivable. We wonder will his archives suffer the same fate. Black academics have shown little desire to help us with the project to have his archives placed in a secure institution. A few have given contacts with curators at various institutions, but their interest in aiding has been Miller Lite, some of these intellectuals simply disappeared from the radar screen after professing they would be helpful with the organization and acquisition of the archives.

It has been suggested the price is too high, but after a life of de facto house arrest and black or rather white listing, why should the Hare archives go for peanuts, especially when the collection is substantial, over 200 cartons of letters, manuscripts, notes attached to news clippings, margin notes in books, records of his clinical psychology practice, photos, notebooks, speech notes and drafts, published articles in magazines, newspapers and books, including his collection of Black Scholar Magazine, of which he was the founding publisher, awards and honors, audio and video tapes, hundreds of floppy disks, etc.

We call upon Black academics to use their resources and contacts to assist with the sale of these important archives of two of the most important intellectuals North American Africans have produced.
In short, the price is negotiable so make us an offer we can't refuse. Dr. Hare has asked me to consummate this project at the earliest possible date. We call upon you for your immediate assistance.
Let me hear from you ASAP.
Sincerely,

P.S. At the very least, intellectuals and academics are urged to write letters of support, calling upon academic institutions and/or private institutions take a serious look at acquiring the archives. They are now available for viewing. Call me for an appointment. MX

Notes from the Master Teacher of Black Studies

Also folded in the book with the birthday greeting card to me from Max Stanford, aka Dr. Muhammad Ahmed (most feared black militant by FBI in the late 1960s) is a note from a boy named Cadence, saying “I love Dr. Julia Hare.”

I notice you left the birthday card from Max Stanford (Muhammad Ahmed), I guess because it was tucked in one of a stack of books. One of them, “Black Writers of America: A Comprehensive Anthology” (Macmillan, 1972), has me and Tolson in it (pre-Great Debaters, Wiley College, where he practiced and James Farmer was a student before Tolson moved on to Langston and left debating for poetry and drama, aiming at Broadway and hitting Hollywood); indeed the editors discuss Tolson and celebrate him as one of my teachers in the preface to my essay, “The Challenge of a Black Scholar,” I see they gave it a section all by itself, “Essay” under “Part VI: The Present Generation: Since 1945,” though near the tail end of the book, just before Martin Luther King, Malcolm X, Eldridge Cleaver, and The Blues, in that order.

Talk about black studies, which they also mentioned, the article was also reprinted in a number of places, like such other articles as “Black Ecology,” in a number of different languages around the world. In fact I just got a call on Friday from a University of Pennsylvania black female professor of ethics (as you know they worry about what’s right and wrong -- while I worry about what’s right, I know what’s wrong ), wanting to interview me on the article. I told her I’d have to take a look at it and get back to you, because I’ve forgotten what I said in it, especially since I was writing it while I was in jail in San Francisco (they didn’t let me keep anything but a paperback I had with me when arrested, Karl Mannheims “Idelogy and Utopia.” No pencil, so I used my thumbnail to mark off passages I wanted to quote or paraphrase. But I didn’t just use Mannheim, lest black intellectuals say it’s not black enough, not even black studies in the first place. And anyway, how come you didn’t mention Moses.

I also don’t want you to take the book, “Medicine in the Ghetto” too lightly, not even my essay in it. Its editor, John Norman, was the director of the conference put on by the Harvard Medical School at Wentworth-by-the-Sea in New Hampshire in the late spring of 1969, but he was black, as were most of the participants. On my panel was the now late Charles Sanders, then the managing editor of Ebony magazine, when magazines were magazines and print media was print, The chairman of the panel, I believe, was the president of Meharry Medical College (I know he was the one who invited me). I forget the other person or two.

Some people think black studies is equivalent only to ancient history (“contributionism” a term I coined in the early 1960s at Howard – I note that white individuals have taken it up but could find no reference before the early 1960s, and certainly I coined it for myself and my students at Howard. Indeed circa 1970 the black sociologist, West Indian, at Harvard, wrote an essay in the” Crimson,” in which he referred to me and “Contributionsm” but added two categories. Jancie Hale Bensin in her book on black children, their cultural roots and learnin styles, summarizes Patterson’s article but gives “contributionism” not to me as Patterson had, but to him. (Patterson may have mentioned me but kept the term for himself, a common ploy of black intellectuals (creatures who think black studies is equivalent only to an account of how the first physician or something was black, Imhotep, and arguments over the proper spelling of his name, Immutef, or the first god was black (wouldn’t you know it?), the first devil, to the first person to make a spool or a piece of thread, etcetera. That’s one reason black studies and black intellectuality in general got bogged down and locked in antiquity from 1969 to 2009; and only came out to wail and bash the first black president for not picking them up and flinging them into the kingdom of snow white liberation.

As regards the stuff in my storage in the office building, I admit I wasn’t up to the challenge of taking those heavy file cabinets of files packed and crammed in there last Sunday morning. Don’t know whether that’s worth just going one day back again and wrenching the cabinets out and seeing what if anything we need to keep that’s not in current use. If so we would need Ali or some such heavyweight to help, I think, to boost the meager might of two old men and a pretty woman or two; although it was precisely two women of the physical stature to rival Ali who crammed them in there in the first place. The ringleader was a literary enthusiast and skimmed and got away with my big volume of the complete works of Shakespeare and God knows what. We weren’t thinking about archives -- at least I wasn’t. It’s like one continual try in a marathon game of finders keepers.

It’s good you’re making a movement out of the Archives Project, just don’t make me the sacrificial lamb. I’m trying to work my way out of this quagmire, this nightmare of deprivation, before I wrap my smothering blanket around me and lie down to pleasant dreams.

Hotep (is that black enough for you?),